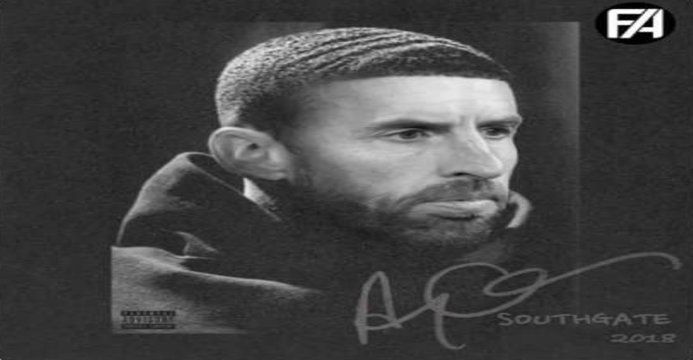 England have (finally!) won their first ever World Cup penalty shootout after beating Colombia 4-3 in an intense fixture that finished 1-1 after extra-time. The English have defender Eric Dier and goalkeeper Jordan Pickford to thank for pulling them out of a self-dug hole, both in regular time and in the shootout, as Pickford saved a crucial penalty and Dier stepped up to score the winner.

England started the game brightly and pressed their South American opponents from the first minute, but failed to finish any of their created chances. Top scorer, Harry Kane, had some glimpses at goal though, threatening David Ospina. However, Yerry Mina and Davinson Sanchez did well to contain the Tottenham striker, and limit him to holding the ball up and laying it off. The game soon became more of a brawl than a football game when the hot-headed Colombians began to unbridle the heavy tackles. The English players did well to keep cool heads and not be drawn into Colombia’s fiery setting , to be fair. Credit to them for that. It ended 0-0 at the break.

It was more of the same from England in the second half, including not finishing chances. But another daft Colombian moment gave England a penalty as Carlos Sanchez wrestled Harry Kane to the ground in the penalty area… and we can all guess who stepped up to take it. Who else? Harry Kane himself. England’s formidable captain struck it down the middle with Ospina diving to his left. 1-0 England after 57 minutes. 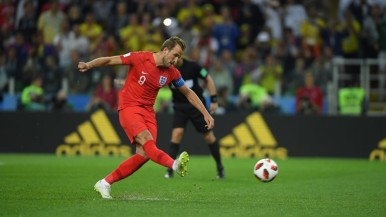 CLINICAL FROM THE SPOT… IN GAMEPLAY
.
Harry Kane’s successful penalty conversion meant that England scored each of their World Cup penalties (11) in regular time and extra-time, but they’ve never won a penalty shootout until today.

The introduction of Jamie Vardy and Danny Rose opened up more opportunities for the Three Lions as their pace troubled the Colombian defence. Colombia had their first real chance in second half stoppage time when Uribe unleashed a rocket of a shot from long range, which forced Pickford to make a brilliant save and put it behind for a corner. But, from the resulting corner, Barcelona’s Yerry Mina rose high and headed home. That was the defender’s third goal of the tournament and it earned Colombia 30 more minutes to win the game. 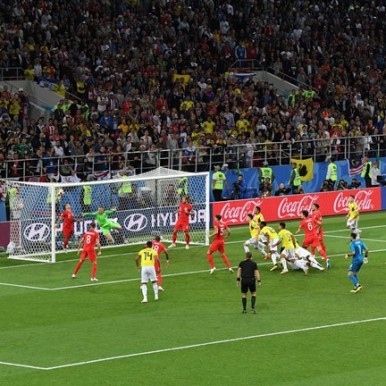 The tables turned in extra-time. Colombia were now the ones in charge of the game with England unable to get a proper sniff at goal. Neither team could capitalize though, and the dreaded penalty shootout awaited.

English fans in the stadium, in England and across the world were in agony… and the players on the pitch as well. The fear of being knocked out on penalties again stormed their hearts and minds. The weight of an entire country rested upon the shoulders of these players and they knew that they had to deliver.

Things were going well when Harry Kane and Marcus Rashford wonderfully scored their penalties after Falcao and Cuadrado also put theirs away. Muriel then converted for the Colombians to make it 3-2. But the English penalty demon seemed to be rearing its head once more as Jordan Henderson was saved by David Opsina. I think the expectation of being eliminated was beginning to settle within England fans worldwide. But if God could save the Queen, who’s the England National Team? It seemed like God was indeed working harder than England’s shootout devil when Uribe then saw his penalty hit the bar, and Kieran Trippier leveled the score at 3-3. It was now automatically sudden death.

England’s fairytale story continued as Pickford stood big to save Bacca’s penalty, placing the Three Lions one kick away from the quarter-finals. There were nerves. There were tears. There were people who couldn’t even bear to look as Eric Dier was given the job to take England’s fifth penalty, and the world awaited the result. As hearts thumped, palms sweated, pores raised, Dier stepped up… and scored! England had won their first EVER World Cup shootout. England had survived! Who could’ve believed it? Who could’ve predicted it? This is simply the World Cup that keeps on giving! 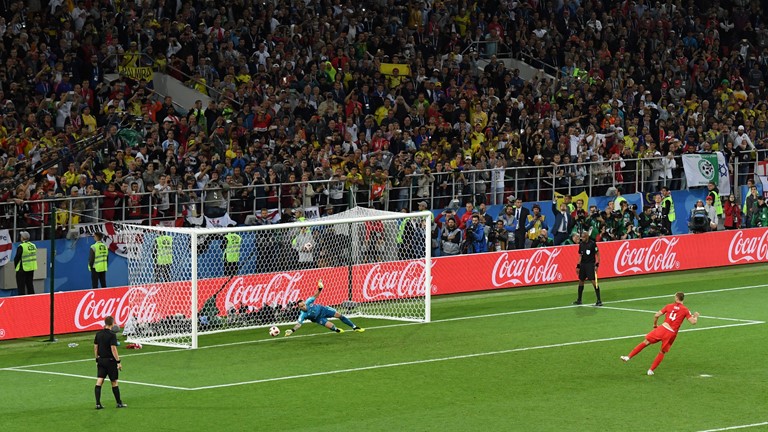 PICKFORD: THE SAVIOUR
.
Jordan Pickford is the second England goalkeeper to save a penalty in a shoot-out at a World Cup. David Seaman was the first to do so in 1998, saving Hernan Crespo’s shot.

England survived quite a scare. It was truly another wonderful chapter in the book of this beautiful tournament. Who said you needed experience to win? Sometimes a youthful team that’s hungry to make their mark is just as dangerous, and we’re seeing exactly that from this English team who’ve already created history. New team, new territory!

The Three Lions advance to the quarter-finals for the first time since 2006 where they will face Sweden, as the Swedes edged Switzerland earlier today. Judging from previous years, this fixture is a World Cup classic with many special moments.

With England’s side of the bracket possessing some “inferior” teams, the dream is alive for them to win their first world title since 1966. If England defeat Sweden, either Russia or Croatia would be awaiting them in the semi-final, two teams that England would fancy beating. Their route to the final seems pretty straight forward. But they can’t get ahead of themselves. Taking it one game at a time should be the objective. You can’t be complacent because you never know what can happen in this unpredictable tournament. Let’s hope for more special moments and many more nail-biters ahead in what has been a truly magical World Cup so far.