Born in Trinidad, David Scarlett is 22 years old and is a very passionate individual towards his crafts & the things he loves. Those cherished gems include God, his family, his closest friends, football, and music (drums, to be specific). He is also an avid Chelsea fan, supporting the Blues through thick and thin since 2004.

David loved sports from a young age, particularly football. He would ask his father to take him to a field near his home to play football with his brothers. When he couldn’t go, the Scarlett brothers would play in the yard with their neighbour. He wanted to play “real” football with a team but his father, being Jamaican, opted to introduce them to athletics instead. However, he’d learn to make room for both, playing football in school while competing at club and school levels as an athlete.

David was growing to be a promising 400m and 200m runner, winning medals at several school and club meets. He qualified the National Secondary School Championships while at St. Benedict’s College after placing 2nd in the Victoria Zone 400m final. However, his race on the big stage didn’t go well, but it gave him something to progress from. David’s athletic run (pun intended) lasted from late childhood to mid-teens, before completely moving on to football at age 14. He’d then go on to play at Dunstan Williams Soccer Academy and Naparima College, after a transfer from St. Benedict’s College. He played at U14 and U16 levels for Naps prior to moving from on-field activities to broadcasting. David created the media organization, Naparima College Sports, as a lower 6 student at Naps because he still wanted to be involved with football despite no longer playing competitively. This platform was used for commentary, analysis and statistics to provide followers with detailed descriptions of matches. Naparima College Sports (accessible on Facebook and Instagram) is now followed by thousands of people and is, especially, cherished by former Naps students who are unable to attend Naps games.

Along with sports, David got into music. At 8 years old, he would sit at the front of his church on Sundays and observe the drummers during worship. He was given his first pair of drumsticks a year later and began beating pots, pans, and anything else he could find. He continued to observe different drummers, listen different genres of music, and practiced, along with playing at different small gigs, until he was given his first big opportunity to be the drummer at his cousin-in-law’s church. One year later, he was recruited to be a permanent drummer at his home church. From then, he began playing with different bands in South Trinidad, gaining experience with every gig he was a part of.  David also tried his hand at the guitar and the keyboard, but didn’t make good very good friends with them. However, he did go to vocal classes, which helped to refine his voice, and he began singing in church.

While at UWI St. Augustine, he was one of the first members of Canada Hall’s band, F=MA, who earned many fans after every concert they performed at. He also played football for C-Hall during his four-year stay. In his final year, many doors opened up for him, as he was able to host the Invitational Football Cup with his classmates, was hired as an assistant coach at Dunstan Williams Soccer Academy, visited Auburn University and created links for the future, and re-discovered his childhood and teenage love for writing (publishing two feature articles for academic purposes). The resurrection of his writing passion lead to him creating this blog site. 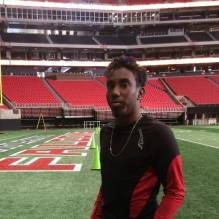