The first two Round of 16 games were decided today as both Group A and B concluded. With Egypt and Saudi Arabia already eliminated from Group A and Morocco out of Group B, the final day was always going to produce some thrilling matches. Uruguay faced the hosts, Russia, for top spot in Group A while Spain, Portugal and Iran were battling for qualification spots from Group B, with a little more complications than the first group.

Uruguay didn’t concede a goal after their first two games, and Russia proved to be heavy hitters after winning 5-0 and 3-1. Both teams knew how important topping the group is for the sake of their position on the bracket in the knockout rounds. First-placed teams (usually) tend to get “easier” games by playing second-placed teams, but this World Cup has proven that no game is an easy game. The first ever World Cup winners opened the scoring in the 10th minute when Luis Suarez, who hasn’t been at his best so far, netted a free-kick from the edge of the box (although it might be argued that Akinfeev in goal should have done better). Suarez’s second goal in as many games gave Uruguay the confidence they seemed to be lacking. That rallied them to push for more, and Russia didn’t seem like they even wanted to play a final group game.

The South Americans doubled their lead in the 23′ when Diego Laxalt’s deflected shot off Russia’s top scorer so far, Denis Cheryshev, resulted in the sixth own goal at Russia 2018; equalling the record for a single World Cup (1998). Things went from bad to worse for the hosts when defender Igor Smolnikov was given his marching orders in the 36th minute after receiving two yellow cards. Cheryshev was, then, sacrificed for Mario Fernandez to restore a back four. Despite attacking changes made by head coach Stanislav Cherchesov, Russia still couldn’t breach La Celeste’s defence. Edinson Cavani settled the three points in the 90′ after pouncing on Akinfeev’s parry from Godin’s header. That goal meant that he equalled Suarez’s record by scoring at three different World Cups (2010, 2014 and 2018), and Uruguay topped Group A.

The “game for pride” in the other Group A fixture saw Egypt’s Mo Salah scoring his second World Cup goal with a cheeky dink over the keeper. Egypt had something else to celebrate when Essam Elhadary, the oldest player to ever play in a World Cup at 45 years and 161 days, saved a Fahad Al Muwallad penalty, but their send-off party was interrupted when Salman Alfaraj converted the Saudis’ second penalty of the day just seconds before the break. Saudi Arabia nicked it in second half stoppage time when Salem Aldawsari rolled home a volley to snatch victory with the game’s final influential touch. Before kickoff in Group B, Portugal led Spain at the top on fair play, as they were even on points, goal difference, goals scored, and goals against. But they possessed one less yellow card than the Spaniards, which is what had them at the summit. Iran also had a chance of progressing, needing a win against Portugal to advance. Spain faced already-gone Morocco, who were still up for a fight in the tournament, and Portugal needed a draw against Iran. Last night, Iran’s fans surrounded Ronaldo’s hotel with loud music and a wild party, trying to deprive him of valuable sleep. The Portuguese star implored the Iranians to let him sleep, but they were deaf to his pleas.

When the action got underway, a midfield mix-up between Iniesta and Ramos in the 14′ sent Khalid Boutaib through on goal with a 1v1 against De Gea, and he slotted it between the keeper’s legs for 1-0. Spain fought back and levelled the score five minutes later when Isco buried Iniesta’s layoff near the 6-yard box. While those two teams went into the break at 1-1, Ricardo Quaresma fired Portugal in front with a wonderful outside-of-the-foot curler into the top corner in first half stoppage time.

Ronaldo’s possible lack of sleep seemed to be affecting him on the pitch, as he failed to impact the game in any way. Iran’s defence kept him quiet until the 51′ when he was given a penalty after a VAR review on a foul on the Real Madrid man. He stepped up… and was saved! A poor penalty towards his right side made it easy for Ali Beiranvand in goal. This was the 19th penalty of the tournament, breaking the record of 18 set at 1990, 1998 and 2002. Additionally, Cristiano Ronaldo is the fifth player to miss a penalty at this World Cup, one shy of the record of six, set at South Africa 2010; and the first Portuguese player to miss a penalty at a World Cup. Things almost got worse for Ronaldo when he was subject to a VAR review for a possible red card after a tussle with Morteza Pouraliganji, but was sympathetically shown yellow instead.

In the other game, Morocco regained their lead in the 81′ with a smashing header from Youssef En-Nesyri. But stoppage time drama in both games saw VAR at the center of attention once more. Spain benefited from a VAR decision in the 91st when an offside (goal) decision was overturned, awarding Iago Aspas his goal and Spain a last-gap draw. Iran was the other team to be given the VAR green light when they were given a penalty after review of  handball against Rafael Guerrero, with Karim Ansarifard scoring Iran’s first goal of the tournament. While Spain and Morocco shared the spoils at 2-2, Iran had the chance to win it in the dying seconds, but Mehdi Taremi could only hit the side-netting. That miss turned out to be the difference between a place in the last 16 for Iran, and the difference between elimination and progression for Portugal. It ended 1-1. The Iranians, players and supporters alike, were in uncontrollable tears. They were so close to history, but escape from the group stage evaded them once more. Portugal, on the other hand, were totally relieved. They survived quite a scare, but could now focus on knockout football from here. 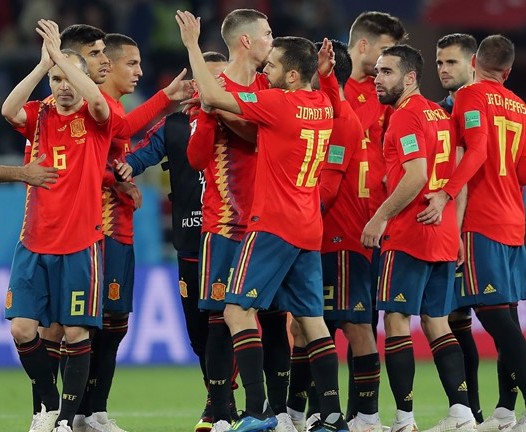 Here’s how Group B finished:

With the two groups decided, here’s what the tournament bracket looks like for the knockout stage: The bracket will start to look even tastier tomorrow when France, Denmark/Australia, Croatia, and Iceland/Argentina/Nigeria enter the fray.